The Energy Sector: Current State of Affairs and the Road Ahead 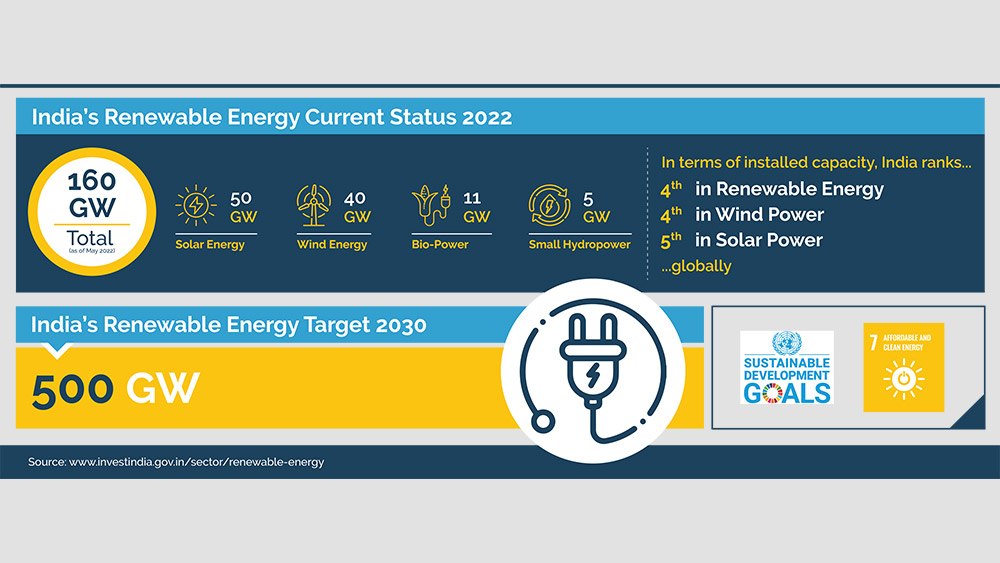 India took a major step towards carbon neutrality at the start of this year. First, the government announced that it aims to reach net zero emissions by 2070. It was also announced that India aims to meet 50% of its electricity requirements from renewable energy sources by 2030.

Achieving this goal will undoubtedly be difficult, because a large segment of India’s population does not have access to clean energy. However, several steps have already been taken to overcome this challenge, not just in India but across developing nations. Currently, nearly 72% of the increase in energy consumption from renewable sources – wind, water, solar, biomass, and geothermal energy – comes from developing nations, with India leading the way on several fronts.

In India, the search for renewable sources of energy often requires balancing out three contradictory goals of the economy: the rapid pace of growth; having clean air and skies, i.e., limiting pollution; and meeting our global commitments on climate change.

Despite this, India has added 15.4 gigawatts of renewable power capacity over the past few years. The country is now the 3 rd largest market—after China and the United States—for new solar photovoltaics (PV) capacity, and 4 th in the world for total solar energy installations.

India has also committed itself to increasing its renewable energy installed capacity to 450 GW by 2030 and aims to develop and implement a National Hydrogen Energy Mission to scale up annual green hydrogen production to 1 MT by 2030. But, as mentioned earlier, there are several challenges to overcome.

The biggest challenge India faces is the ever-growing demand for renewable energy. Renewable energy projects were once few in number; but now they produce so much power that operators are sometimes required to reduce load or switch off power at a renewable energy station to ensure smooth operation of the grid. Recently, however, there have been efforts in forecasting and scheduling wind and solar power, to help achieve a balance between the surplus and deficit in the electricity produced from renewables.

Furthermore, while the demand for renewables-generated electricity has grown, coal-fired generation has not reduced. As a consequence, India has, today, ended up producing more power from coal than it consumes, and has invested in more coal-fired generation infrastructure than is needed. Distribution companies, as a result, have refused to sign new agreements to purchase renewable power as newer projects begin operations. Currently, nearly 19 GW of renewable energy tendered by the Solar Energy Corporation of India is on hold due to electricity distribution companies refusing to sign the power purchase agreement.

To overcome these challenges, several interventions are required: distribution company reforms, frameworks to adopt new technologies, and technology solutions to integrate an increasing share of renewables into the grid.

Currently, the global energy system is undergoing transformation, and by 2030 it will become more digitised, decentralised, and decarbonised. It is interesting to point out that all three are interconnected. To achieve decarbonisation, we need to swiftly shift to an energy system with negligible carbon dioxide emissions. To achieve this quickly, we need to improve systems for monitoring and controlling the way grids, buildings, transport networks, and other energy- intensive sectors integrate. This in turn requires digitisation in a decentralised manner.

A key route to achieving such digitisation is applying artificial intelligence or machine learning. While there are cases of AI already in the industry, there is a need for AI technologies to be deployed at a larger scale and at a more rapid rate to speed up the energy transition in a streamlined and economically-feasible way.

Another way to achieve digitisation is to use smart grids. Smart grids refer to power supply networks that use digital communications to detect and react to local changes in supply, enabling the self-healing of a network in the case of a disturbance. This improves the reliability of electricity networks and makes the power grid amenable to renewable energy inputs through distributed generation.

While there was a global drop in the demand for smart grid systems during the COVID-19 pandemic, the demand has since risen significantly and smart grid technologies are estimated to be valued at US $140 billion by 2028. India is already leading the way in the smart grid market, with the Government of India investing around $25.9 billion to modernise its power sector during the current decade. In 2015 itself, the Government of India set up the National Smart Grid Mission to plan and monitor the implementation of policies and programmes related to Smart Grid activities in India.

To further improve the current state of the energy sector, the Government of India has already considered delicencing it. However, it is critical to note that delicencing can introduce competition and enable retail choice for customers. A private-public partnership model is one way of tackling the concerns raised by state governments regarding this. Private players, too, understand the gravity of the need to transition to a renewables-based economy, and will be open to working with the government.

Meanwhile, the World Economic Forum has suggested a five-point action plan for the transition to renewables, which involves promoting the hybridisation of solar and wind energy and building ancillary markets, building enhanced evacuation infrastructure, and developing battery storage solutions in addition to investing in digitisation, and getting distribution companies on board.

While these plans will take time to execute, they are critical for ensuring that India’s energy sector becomes sustainable and won’t be in a precarious position in the years to come.

Watch this space for more as we explore how the transition to a green economy can be completed by bringing electric vehicles onto the roads of India.