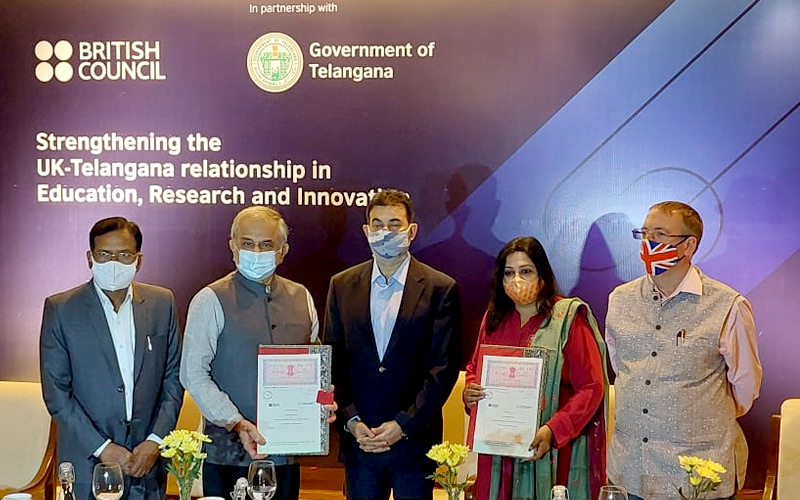 Government of Telangana and UK strengthen collaboration in Education, Arts and Innovation

Hyderabad, 9 February 2022: British Council, the UK’s international organisation for educational opportunities and cultural exchange, and the Government of Telangana State, today signed a Memorandum of Understanding (MoU) to renew their partnership in the area of Education, English and Arts aimed at creating global opportunities for the youth of Telangana.

The MoU underlines the Telangana State’s trust in the UK as a chosen partner as it plans to engage further with the UK and its devolved administrations to explore collaborative opportunities. While the British Council and the Telangana State Council of Higher Education (TSCHE) have been partnering to achieve the state’s knowledge and employment ambitions for its youth for the past decade, an MoU was signed between British Council and the government of Telangana in 2018 to reinforce mutual commitment to strengthen education and cultural cooperation. Subsequently, an MoU was signed between British Council and TSCHE in 2020 to work on various educational projects such as the revision of the curriculum for arts and commerce institutions, with the intent of enhancing the employability rates of the youth and ensuring that the curriculum aligned to industry expectations.

Under the extended three-year MoU between the Government of Telangana and British Council, a new memorandum of understanding has been agreed between Research and Innovation Circle of Hyderabad (RICH) and the British Council, that will see both organisations work closely to engineer new partnerships between universities, research institutions and centres of excellence in the UK and in Telangana. British Council will be the key knowledge partner of RICH to facilitate partnerships between RICH and UK higher education institutions (HEIs) in the areas of Aerospace, Defence, Life Sciences and Pharma, Food and Agriculture, and Sustainability. The two partners will also partake in joint innovation or entrepreneurship initiatives, like sharing of best practices and / or development of bespoke courses to develop relevant skills amidst the young people of Telangana.

Shri Jayesh Ranjan, Principal Secretary to Government, Department of Industries and Department of Commerce, Information Technology, Electronics and Communication said, “Telangana is India’s youngest state, but also the most advanced and progressive, internationalisation is in Telangana’s DNA. Our vision for the state of Telangana is to be full of opportunities for its youth – students, professionals, entrepreneurs, artists, scholars and researchers. We are glad to have found a partner in the UK that understands our philosophy and is able to work with us to achieve our vision. The positive impact of British Council’s work in the state is visible and we are hopeful that the programmes with UK and Wales continue to help our young and bright minds get international exposure, and for Telangana’s education system to become truly global.”

Janaka Pushpanathan, Director British Council, South India, said, "The new three-year MoU is a testament to the deepening of partnership between the progressive State of Telangana, and the UK and its devolved governments. The road ahead has been built on the back of the impact of our work with the Telangana Government and the for the youth of Telangana and the TSCHE in the field of Education, English and Arts. We are excited about the road ahead and acknowledge the trust that has been placed in British Council as the facilitator of the Telangana-UK programmes.”

Shri Ajit Rangenekar, Director, Research and Innovation Circle of Hyderabad, “In Collaboration with the British Council and the Government of Telangana, going forward, we want to make the Telangana and Hyderabad the preferred location in the world for anything related to Lifesciences including sustainability and personalized medicine. UK and India have been in the forefront in this sector, given the vaccine discovery and production. With large number of universities already in place, our focus will now be to help create centers of excellence. We are actively working with universities in the UK to foster collaborations that are mutually beneficial.”

The Telangana-UK programmes – facilitated by the British Council – have translated into greater exchange and collaboration between higher education stakeholders from both sides, increased collaboration between Telangana and UK artists and increased opportunities for Telangana students to study at some of the world’s best universities in the UK. In 2019, with the support of TSCHE, British Council hosted the largest delegation of 25 UK University Vice Chancellors to South India for an extensive study of the higher education landscape in the State for representatives from 18 UK HE Institutions. Two of Telangana’s largest university systems Osmania University and Kakatiya University – are collaborating with two top universities in Wales - Bangor University and Aberystwyth University to reform curriculum that will benefit 800,000 learners year on year in the state. From an arts and culture standpoint, collaborations between UK and Telangana artists took center stage at the recent editions of the Hyderabad Design Week and the Hyderabad Literary Festival – inspiring many future artists.

About the British Council:

The British Council is the UK’s international organisation for cultural relations and educational opportunities. We build connections, understanding and trust between people in the UK and other countries through arts and culture, education and the English language. Last year we reached over 67 million people directly and 745 million people overall including online, and through broadcasts and publications. Founded in 1934 we are a UK charity governed by Royal Charter and a UK public body. We receive a 15 per cent core funding grant from the UK government.


About the Research and Innovation Circle of Hyderabad (RICH):

The Research and Innovation Circle of Hyderabad (RICH) is an arm of the Government of Telangana that is designated as a Hyderabad City Science and Technology Cluster, a megacluster initiative by the Office of the Principal Scientific Adviser (PSA) to Government of India. RICH aims to create a knowledge base and drive innovation to address critical local—city- and state-level—problems. It enables the development and realization of solutions to complex challenges by creating networks among national research organisations and academic institutions, industry, start-ups, civil society entities, state governments, and central ministries.

Back to News and Events